Consistency in the music business is an often undervalued and underrated characteristic, but the reality is that the capacity to constantly produce albums, tour and make a profit off them is something that can’t be achieved with ease. If the band is playing Rock or Metal, it gets ten times harder, but that’s where Evolution comes in.

Disturbed is one of those anomalies from the somewhat modern Rock and Metal scene, always producing albums that have very positive receptions and maintaining a certain level of consistency in their music. Minus a hiatus from 2011 to 2014, the band has always been making music since their 2000 debut, The Sickness, striving to particular new heights with their vocalist, David Draiman, becoming one of the band’s most distinctive symbols and face.

They have a new album coming out, Evolution, in October 19th and we have decided to have a look at the band’s past, present and future, weighing their role in modern Rock and Metal plus a little analysis of all their albums and what they represented for Disturbed in each stage of their careers.

In their own words: Are you ready?

The early years and The Sickness

The band was initially formed back in 1994 under the name Brawl (funnily enough, they were going to name it Crawl, but another band already had that name) with guitarist Dan Donegan, bassist Steve “Fuzz” Kmak and Mike Wengen. Despite what many casual listeners may have thought, David Draiman was the last to join Brawl’s first stable lineup, after the band had to part ways with vocalist Eric Awalt.

Draiman was among the many vocalists to audition for the vacant spot and he mesmerized Donegan due to his now iconic vocal melodies and willingness to work with the band’s original material since the get-go, which was something the other vocalists were not trying. Donegan recalls that, still amazed, by saying that “after a minute or two, he just starts banging out these melodies that were huge…I’m playing my guitar and I’m grinning from ear to ear, trying not to give it away that I like this guy, you know, because I don’t want to, you know…[say] ‘Yeah, we’ll give you a call back. We’ll, you know, discuss it.’ But I was so psyched. Chill up my spine. I’m like, ‘There is something here.”
Even though he was the last to join, Draiman was the one who suggested the name Disturbed for the band; a name he had been considering for a lot of time and thought that was fitting for them, thus establishing the first official lineup in 1996.

Before landing their first official contract, Disturbed did several concerts in Chicago despite not having the biggest following due to the city’s minor interest in Rock and Metal music. It wasn’t until mid-1999 when they signed a deal with Giant Records and published their debut, The Sickness, which would elevate them to greater heights that they ever thought.
Back in 2000, when The Sickness was released, Nu and Alternative Metal were the biggest sounds in the scene and Disturbed’s rather odd combination of those styles with classical Metal, Hard Rock and even a little bit of Reggae, plus Draiman’s melodic singing style provided them with a very characteristic sound that set them apart from the rest. The Sickness managed to get into the Top 20 of Billboard’s 2000, with songs like Down With The Sickness and Stupify becoming instant Disturbed classics. They also showcase some of this album’s tracks in several videogames, movies and TV shows such as South Park, Queen of the Damned, Rock Band 2 or Dragon Ball Z: Cooler’s Revenge, among many others.

Despite being aligned with bands from the Nu Metal movement such as System of a Down, Korn, Linkin Park, Deftones and Limp Bizkit from the very beginning of their careers, the band has never felt related to that particular style and they feel much more closed to what classical Metal do. Draiman had this to say about it: “We never had the stereotypical attributes that those bands had. We don’t rap; there’s no turntable involved; no fusion in that respect. We play, in my opinion, classic metal. Sabbath, Maiden, Priest, Metallica, Pantera: these are the bands that made us want to play.”

The Sickness was the kind of debut album that made a lot of noise from the get-go; Disturbed knew how to get people’s attention from the earliest stages of their career and now the pressure was on these four men to come up with something that could keep the success coming. Their follow up, Believe was lightning in a bolt for these Chicago boys, debuting at number one at the Billboard charts, rivalling their nu Metal counterparts Korn and Linkin Park back in those years.

The tour in 2003 was a massive success, with a great show at Ozzfest and singles like ‘Prayer’ and the now classic ‘Remember’ reaching to a wide variety of listeners while maintaining a very distinctive essence in their sound. Their lyrical themes, such as religion and the loss of faith, were one of their main traits in this album and it certainly had an impact with their audience. As Draiman himself stated: “The whole album’s about questioning your beliefs to determine what you really can believe in.”

What was already a great momentum reached far greater heights with Ten Thousand Fists, becoming their second album to debut in the top spot in the Billboard chart and featuring their new bassist, John Moyer, after they fired Steve Kmak in 2003. Taking a page from Metallica mixing brutality and melodies in Master of Puppets, Ten Thousand Fists is not only the band’s second highest selling album in the United States, but, musically speaking, it manages to combine the slick intensity of The Sickness with Believe’s slightly more melodic approach; tracks like Stricken, the title track and Guarded showcase all of the band’s strengths, such as their vocal melodies, intense riffing and powerful mid-tempos.

As an interesting side note, the music video for their cover of the hit Genesis song, Land of Confusion, was animated by Todd McFarlane, the comic book artist, businessman and creator of the famous character, Spawn.

Indestructible, Asylum and their hiatus

After three very successful albums and a very proficient working relationship, the band decided to part ways with producer Johnny K and went on to create what could be considered the band’s most famous album, Indestructible, released in 2007.

Significantly darker than Disturbed’s previous body of work, this album was when David Draiman’s influence in the writing process was made even more influential and important by incorporating very personal lyrics about the several struggles he went through in his life. It prompted the band to write more atmospheric songs that could fit to that particular approach. As Dave puts it, “I’m a big believer in the vibe of the music and the feel of it, how the song makes you feel musically should dictate what it is to be about and so if you start with something that has meaning, but the music doesn’t support the meaning, then what good is it?”

The marketing campaign for this album was certainly a bit more different and digital, if you will to previous efforts and the results were there for all to see. Debuting music videos on MySpace, releasing tracks at iTunes and they even performed a concert in Kuwait for the American military men that were stationed there as a way to show them their support in that mission.
After three years of arduous promotion and touring, the band released Asylum in 2010, their fifth album and one of the most divisive to some of their fandom, due to them trying several new aspects in their music and having a somewhat different approach to their sound. Having said that, singles like Another Way to Die and the title track provided great response and reactions from their fandom.

Afterwards, the band announced a hiatus for a few years to refresh the batteries and for several band members to do other projects; Draiman seized this opportunity to make clear that there no problems within Disturbed and they just wanted to do something different for a while.

The comeback and Immortalized

It wasn’t until 2015 that the band would come back to the scene and they did it with a bang in the form of Immortalized, their sixth studio album and one of their most well-received bodies of work to date. While Disturbed maintained the hard edge and musical structure from their efforts, Immortalized showed the band’s newfound versatility while keeping their essence; this is pretty evident in widely different tracks such as The Vengeful One, The Light or the Simon & Garfunkel cover, The Sound of Silence, featuring a very different arrangement and Draiman proving his quality as a singer.

As a seasoned and successful band coming out of a hiatus, the reception was massive for this album and it allowed for one of the group’s biggest tours of their careers, proving how relevant had Disturbed become for the Rock and Metal community.

The now, Evolution and the future

It was in January of 2018 that the guys at Disturbed announced they were working on a new album that would be released on October 19th, as we previously stated. Two music videos and singles, ‘A Reason to Fight’ and ‘Are You Ready?’, were released and they have shown the band’s new balance between lighter tracks and the usual headbangers they have been become known for.
David Draiman has been quite vocal about Evolution and he thinks it could be a watershed moment in the band’s history. “If I died after this record came out, and this was the end of our legacy, I’d be OK with that. To me, this is our ‘Black Album’,” he said to Metal Hammer.

If there is one characteristic that can define Disturbed’s career throughout the years, it would have to be consistency and the constant desire to do better and achieve certain relevance with each track they have made. “We’ve always used that as a goal — the record that literally every single track on it could be a hit,” Draiman said to Metal Hammer. “A record that breaks doors down, that opens up new opportunities to us, that helps you achieve true immortality as an artist.”

Of course, plans for a tour are already scheduled and they are going to start once Evolution is released in a couple of weeks. Plans for future albums have already been discussed and Draiman has been pretty adamant to explain that the band is now much more willing to try different things after the phenomenal reception of their rendition of Simon & Garfunkel’s The Sound of Silence–they even got a Grammy nomination for that cover.

The Next Disturbed Album?

As far as the next album goes, Draiman can assure it’s going to happen, but has no specific timeline or date for it. “Hard to say, definitely eventually thinking about making another Disturbed record. I just have no idea when that’s going to be.”

Consistency is hard to find in any aspect of life and Disturbed have made that their sigil, always striving to do well in each album and to provide great music for their fans. While many bands of the Nu Metal movement in which they were unwillingly aligned with had been struggling to stay relevant in these modern times, they are currently at the height of their powers and still releasing interesting and fascinating albums, all while keeping their essence in the process.

To keep going in the music business, you have to go through the painful but rewarding process of Evolution that Disturbed knows all too well. 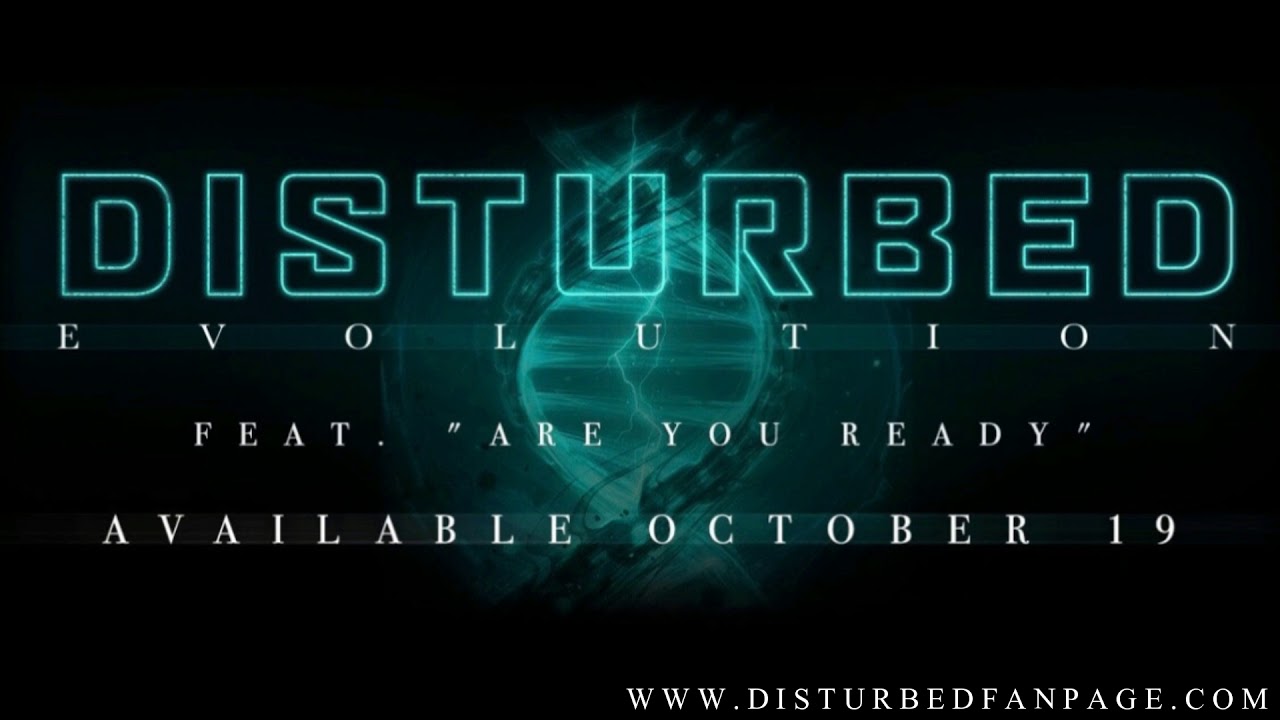